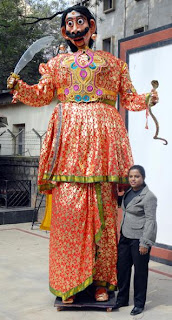 Renowned magician and ventriloquist, R. Indushree, has finally set her eyes on entering the Guinness Book of World Records through her stunning performance with a 10 feet doll.

She claimed that a feat none of the magicians across the world has achieved. She already has recorded her name in the Limca Book of Records and her performances have been telecast by television channels.

She presented her shows at several forums in Bangalore and also Bal Bhavan at the Cubbon Park. Children love to see her shows. Reporters, who were shock to see such a huge doll, asked her several questions seeking her objective to enter the Guinness Book of Records.

Presenting a show to the media with the doll at the Bangalore Press Club on Saturday, which resembles mythological character  mahishasura, a demon who was killed by Goddess Chamundeswari, Ms. Indushree said she had already sent her entry to the Guinness authorities and awaiting their response.

Ms. Indushree said she developed the idea of using Mahishasura when she was invited to present a show during the recent Dasara festivities at Mysore. In fact, she was the only woman ventriloquist to have used a doll of this size. Ms. Indushree has more than 3,500 shows to her credit in the last one and half decade.

Generally, magicians and ventriloquists use dolls ranging from 40 to 45 inches. The young ventriloquist says she performs in Hindi, and English and Kannada. 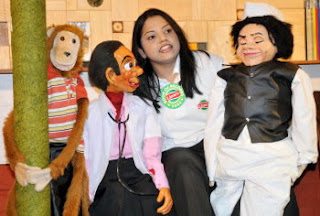 Normally magicians and ventriloquists use dolls ranging between 40 to 42 inches. Use of bigger ones casts huge pressure on the shoulders, besides the vocal chords,  Ms. Indushree said.

The young ventriloquist says she performs in Hindi and English, besides Kannada.

Ms. Indushree's father, Ravindra Konnur, a draftsman with Central Power Research Institute and the architect of the dolls, says he has made four dolls with which she would perform simultaneously in future.

Ms. Indushree said to be India's first ever woman ventriloquist, is an excellent raconteur and uses current affairs as a peg in her dialogues in which she is assisted by Ramanath, a close associate of the family, who scripts it.

It is very difficult to practise with this massive doll, as neighbours and onlookers flock to my residence. I have to wait till dark to do so, she said.

However, the Mahishasura doll performance was meant only for creating the record and there were no plans to continue shows for the public, she added
Share
‹
›
Home
View web version